Dr. Murthy is a Biology Subject Expert Teacher and a Teacher Mentor at BASIS Independent Silicon Valley. She is a founding faculty member, and teaches some of the most beloved Biology courses for our upper school Bobcats. Read on as she shares about one of the electives she teaches on campus.

It is finally Period 8, and students eagerly come into the classroom. They put gloves on their hands, get out the micropipettes from the cabinets, and do a final check of their protocols. They pulverize the chips they selected from the school vending machine (or their favorite snacks from home) with a mortar and pestle. Their next step is to isolate DNA, and set up a Polymerase Chain Reaction (PCR) to amplify a 125 base pair nucleotide sequence from a cauliflower mosaic virus promoter (CaMV35S) typically used in most genetically modified plant products (GMOs). It is not enough for our Biotech students to read that most of the corn and soy flour that finds its way into their snacks is genetically modified; they want to use data to determine if that is the case. 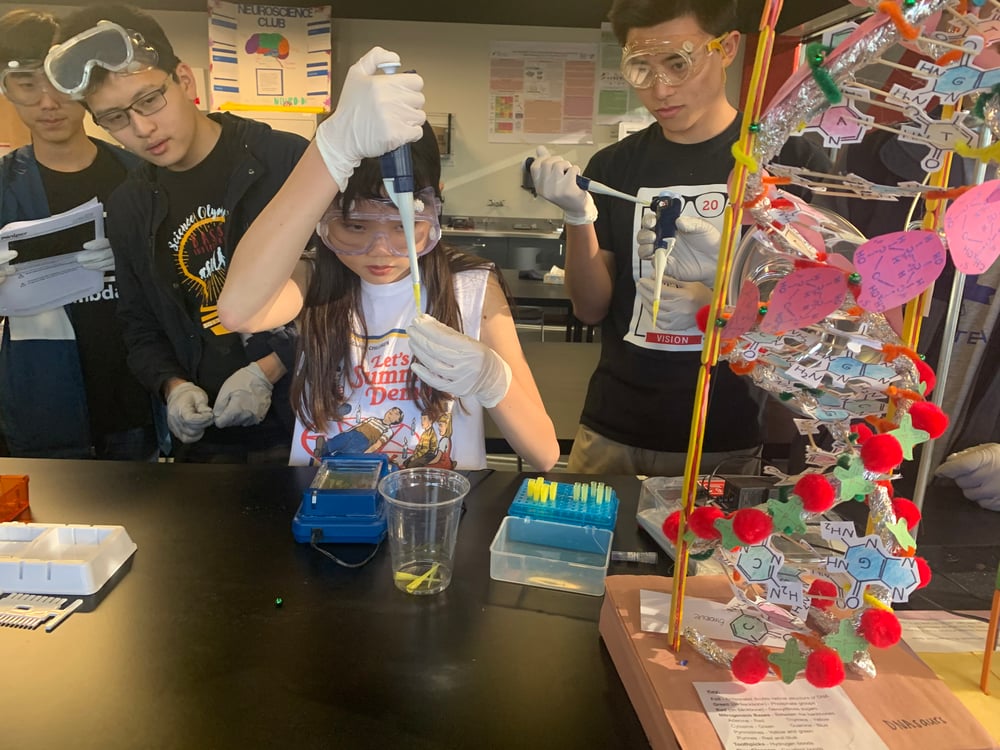 Students working in a project titled So you Think You are Unique? Prove it.  In this project student isolate their DNA from cheek cells and amplify the D1S80 VNTR ( variable number tandem repeat) to generate their unique DNA fingerprint.

Curiosity fills the classroom, and excitement about the unknown hangs in the air. Will their favorite snacks have GMO material? Does it really matter? While their agarose gels run, they watch clips from the film Food Evolution narrated by Neil deGrasse Tyson. They ponder how to meet the food need of the world’s burgeoning population, and consider current environmental activism against GMO crops that exists worldwide. Using case studies, they scientifically evaluate and discuss the pros and cons of genetically modifying food while examining their personal beliefs about eating GMO food. They expand their knowledge about the immune system, and about how the body reacts to allergens using presentations.

At the end of the module, it is clear to the students what an important role education plays in allaying fears about the genetic manipulation of organisms. It is not voodoo magic, but science that can be critically examined! Tomatoes that stay firm after harvesting, if deemed a commercial failure, are pulled off the market while Bt Corn (resistant to insects) is here to stay. The dangers of glyphosate exposure and its overuse are examined, among other questions. Is environmental gene flow a problem between native and GMO plants? What regulatory agencies monitor safety when it comes to this new and expanding field of science? These are just a few of questions that students ask, and find answers to during Period 8. Claims have been made that this coming decade is the 'Age of Biotechnology' with a growth rate projection of 7% between 2018 and 2028 (according to the US Labor statistics). Biotechnology is simply defined as making tools and products useful for humans by merging biology with chemistry, physics, computer science, AI, engineering—it has applications in every facet of human life. It is no wonder that many students are curious about exploring majors such as Bioengineering/ Biomedical engineering, Molecular engineering, Biophysics, Nanotechnology, Use of Data Science/ Bioinformatics to name a few. The merging of various disciplines has led to formation of lucrative, niche jobs making it a desirable field to be in the near future. At BASIS Independent Silicon Valley, the goal of the Biotech elective is to give students the practical knowledge of basic molecular techniques such as DNA extraction, restriction enzyme mapping, gel electrophoresis, forensic STR mapping, bacterial transformation using pBLU plasmid, PCR, ELISA, Southern Blotting, and probe hybridization. Students then take this knowledge to nearby university labs to participate confidently in research projects. This is a class that leans heavily on lab skills, with 75% of the time spent doing lab work. Students start with basics such as making buffers, pouring gels, then move to designing modification to protocols, identifying controls, and finally troubleshooting when experiments feature repeated changing variables. Working their way through the process helps them to understand the techniques better than most students their own age, and actually be productive team members in a research lab. Theoretical knowledge is built about DNA / RNA sequencing, qPCR, CRISPR/ Cas 9 manipulation, proteomics, metabolomics, and metagenomics by reading scientific articles, and watching animations. A reflective and growth mindset is encouraged by featuring debates and discussions on topics such as “Bioethics of Embryonic Stem Cell Research”, and integrity in science. Students watch clips from the documentary Theranos- Out for Blood in Silicon Valley to set the stage for discussions about scientific integrity. Using different modules, students also explore the various career choices related to biotechnology such as patent law.

What would a science elective be without trying to grow your skillset in competition? Starting in the second and third trimester, students who are interested in exploring Bioengineering as a major in college are encouraged to take part in the end of the year competition called BioEHSC at UC Berkeley. According to their website (https://bioehs.berkeley.edu/bioehsc/), “BioEHSC™ asks contestants to identify a problem in medicine or biology and design a bioengineering solution in seven weeks.” Contestants work in groups that meet weekly, and receive mentorship from a bioengineering-focused researcher. Participants prepare presentations, both a poster and power point, and present their findings to a judging panel of professors and graduate students in a final research symposium. The students have an amazing opportunity via this competition to interact and network with students from both the graduate and undergraduate schools, as well as the distinguished faculty at UC Berkeley. Last year, students explored a diverse range of topics from improved biofuel production, integrating human immunodeficiency virus (HIV) detection and treatment with birth control devices, to reducing antibiotic resistance in bacteria that grows in liquid pools in surgical catheters.

Friday lunches with the students, are incubators sessions to hear their novel ideas, questions, and critically examine the feasibility of their creative solutions. Peers present their ideas, justify, argue, laugh, collaborate, and learn from each other. Once again, curiosity fills the classroom, and the excitement of the unknown hangs in the air! What unique research questions will this batch of students come up with? What are the solutions? This is an exciting time to be a part of the “Age of Biotechnology” as an educator at BASIS Independent Silicon Valley.

BASIS Independent Silicon Valley is a private middle and high school in San Jose offering students in grades 5-12 a program benchmarked to the best education systems in the world.

Beyond the Microscope: Bringing the Sciences to Life Through Labs & Experiments (Part 2 of 3)