Being an Exemplary Teacher

Over half of our 2017-2018 high school students have earned an AP Scholar award, recognition from the College Board based on their performance on their 2018 AP exams. These awards recognize students who have demonstrated both a depth and breadth of knowledge because their work has shown college-level mastery across multiple disciplines. 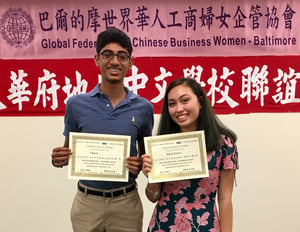 We are proud of Charan R. ’20 and Maria-Teresa T. ’21, who placed first and third, respectively, in the Mandarin Chinese Speech Contest sponsored by Washington Metropolitan Association of Chinese Schools. Both competed in the intermediate group for the D.C. region against other area schools.

We are thrilled that our students thrive in learning various languages. Every April, our students participate in the national French, Latin, and Spanish exams, which are taken by students across the country. All of the students below will be recognized when foreign language awards are given out during awards assemblies on the last day of school.

Pop culture, college football, chemistry, opera, ancient history—the BASIS Independent McLean Quiz Bowl team is ready for it all! The Quiz Bowl team will compete in the 2018 High School National Championship Tournament and the Small School National Championship Tournament. The team’s third place standing at the Mountain Vista Governor's School Open II in January earned them a spot at these national events hosted by the National Academic Quiz Tournaments in Atlanta in May.

Ethan H. ’20, Jamal B. ’21, Victoria B. ’21, and Tad B. ’20 have qualified for the Adam Smith Division of the State Championship of the Governor's Challenge in Economics and Personal Finance. As the BASIS Independent McLean team, these four high school students form one of several teams from across Virginia that will test and apply their knowledge of economic concepts at the day-long competition.

We are proud to induct 37 students into our newly minted chapter of the National Honor Society (NHS) and National Junior Honor Society (NJHS), with 10 NHS members and 27 NJHS members. Students must maintain at least a 3.5 GPA or 90% cumulative average and be in grades 10–12 for NHS and grades 6–9 for NJHS to apply for membership.

For the second year in a row, the BASIS Independent McLean MATHCOUNTS team won the Northern Virginia Region Chapter Competition, which took place on February 3. The team, Eleanor K. '22, Pravalika P. '22, Sam W. '23, and Ethan Z. '23, will compete in the state championships on March 17. The BASIS Independent McLean team is the defending state champion.

The AMC 8 is a 25-question, 40-minute, multiple choice examination in middle school mathematics designed to promote the development of problem-solving skills. Through classroom resources and friendly competition, this event helps educators from around the country identify talent and foster a love of mathematics.

We are thrilled that our students not only took on such a challenge, but that they emerged so victorious.

The National Society of Professional Engineers, National Council of Teachers and Mathematics and CN Foundation created Mathcounts in 1983. These groups founded this national middle school enrichment program to promote the importance and value of math in school and beyond. The program was brought to life through competitions and club activities.

"The win was very exciting as a new teacher and coach. It shows that our new school has some talented kids and teachers willing to help them push to be the best," said Coach McCullough. "The team worked very well as a team as well as individually. They put in a lot of hours on practicing for this."