Today's blog is by freshman Benjamin W., who has a passion for the Washington Nationals baseball team. Thanks for sharing a little more about your interest outside of school and how you spread that passion inside of school, as well.

CRACK! Juan Soto’s bat collided with the ball, which by some magical charm, went through the infield and past an outfielder without being picked up, scoring three runs! I screamed my head off, nearly throwing my rally towel from the 2016 playoffs at the TV. Once I finished celebrating, I texted my friends and we celebrated together. That was how the Nationals punched a ticket to the 2019 baseball playoffs.

If you don’t know, Washington won its first World Series since 1924 this past year, ending their heartbreaking history of playoff disappointment. Their success brought about a lot of excitement at BASIS Independent McLean (BIM). It was the primary topic of discussion. Coincidentally, School Spirit Week occurred during the week of the World Series. One of these days was Sports Jersey day, and it resulted in a ridiculous amount of Nationals gear being worn. I wore my old, tattered baseball cap from elementary school with signatures on it. It’s one of my most prized possessions, and I was extraordinarily proud of it. One of my friends even had a bet with a relative who was a Houston Astros fan (The Nationals opponents during the World Series) and he won! My friend showed me a picture of his relative “forced” to wear Nationals gear to work in Houston. That’s embarrassing! 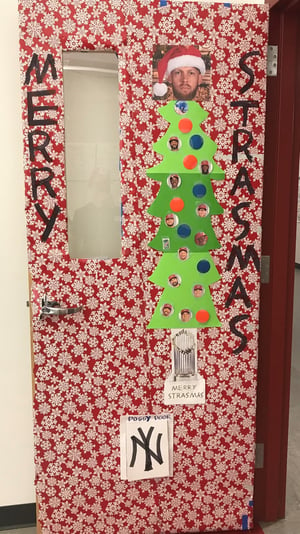 I also succeeded in celebrating the Nationals' victory through a BIM tradition. The school has a holiday door-decorating contest where students can decorate teachers’ doors. My friends and I decided to decorate one of our teachers’ doors with a Nationals theme. The funny part is that this teacher is a New York Yankees fan. The door featured a Christmas tree with photos of Nationals players on it, including the World Series MVP Stephen Strasburg. We went with the theme “Merry Strasmas” because the Nationals had recently signed a seven-year extension with the legendary pitcher. In the end, while the door did not win, the experience was lots of fun!