Highlights From Our Founding Year

Our founding year was marked by incredible academic, artistic, and athletic accomplishments--and we had a lot of fun in the process.

It's difficult to choose just a few, but let's look back at some of the highlights from our first school year.

After a field trip to the U.S. Navy Museum, the Director of Education Programs asked our students to send hand-written letters to encourage old-fashioned letter writing.

Our students happily answered this call!

ABC7 News filmed on our campus for a story publicizing the museum's new letter program to spark further interest in maritime history. Watch the video here.

Our 11th grade Latin students placed first in the Virginia Senior Classical League's 2016 Kickoff Certamen. We competed against 12 other teams at St. Stephen's and St. Agnes School and came home with the trophy. Gratulationes!

Coaches Rikki McCullough, math teacher, and Tyler Sullivan led the MATHCOUNTS team to their 2016 state championship win. Amazingly, all four team members placed in the top 20 for individual competition at the state level.

Two of our MATHCOUNTS students later represented Virginia at the 2016 National Competition in Orlando, Florida. 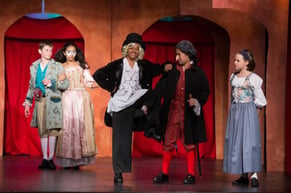 the play, The Servant of Two Masters. This fun adaptation of Carlo Goldoni’s drama draws on the commedia dell’arte comic tradition of stock characters and improvisation.

Part comedy of errors, part romance, part slapstick, the production had something for everyone to enjoy. Outstanding drama teacher Amelia Nickles directed.

It was a hard-fought 17–16 victory against Siena School. According to the team, some good lessons on “never giving up” were learned. 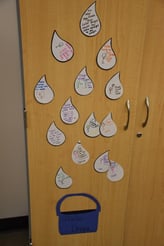 for their peers and school staff, posting their "drops of gratitude" as visual reminders throughout the building. This project was part of a month-long exploration of Gratitude as a theme.

At BASIS Independent McLean, we live by the motto "Show respect, take responsibility, and make improvements."

Recognizing good work is key in developing a positive attitude in ourselves and others.

Our talented kindergarteners and primary students showed off their performing arts chops in a magical Kids on Broadway production.

Directed by Subject Expert music and drama teachers, Michael Junsay and Olivia Michalak, students brought to life music from classics such as The Sound of Music, Annie, The Wizard of Oz, Singing in the Rain, Fiddler on the Roof, and Oliver.

We received many amazing submissions from students in all grades when we announced a mascot art contest.

The two winners, grades 3 and 10, will add their artistic flair to our 2017-2018 Communication Journals. Go Red-Tailed Hawks!

Our Founding Field Day was a great success, with teams composed of students in all grades moving from one exciting station to the next. Anything involving water proved popular on this sunny day, but we also played limbo, conquered an indoor obstacle course, ran the dash, and more.

The day culminated in the much-awaited faculty vs. upper school kickball game, with some students choosing to cheer on their favorite teachers instead of their high school counterparts! An Italian ice truck kept us cool while we watched the fierce but friendly competition. (Staff and faculty won!)

We closed the year on a high note with our very first and very fun Project Week. Students in all grades chose an interdisciplinary project to engage in hands-on learning.

Some projects took us to exciting off campus locales and others allowed us to focus our imaginations within our own art studios, music rooms, school grounds, and even hallways.

Staff and faculty were able to exercise their creativity and tap into their unique interests when designing the week's activities, which resulted in many incredible experiences for our students.

PreK–Kindergarten
We Like to Move It, Move It!
Land Before Time
Create!

We are currently accepting applications for the 2018-19 school year. To learn more about admissions, please click here.

Cast Your Vote for the 2017 Breakthrough Junior Challenge!