This week, Eric M. ’21 shares some behind-the-scenes as an organizer and performer at the NHS Coffeehouse and what the tradition means to him. Thanks for sharing an inside look with us!

In January when we were still on campus, our National Honors Society (NHS) hosted its second annual Coffeehouse. It is an event in which students and faculty can perform their talents on stage while promoting a good cause. To get into the Coffeehouse event, all attendees are required to bring at least one canned good, which is then donated to SHARE of McLean, a local food bank. It is an event that not only strengthens the community, but is also an event that was a lot of fun to host. 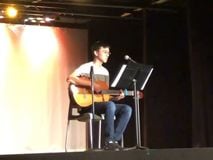 We had many skilled performances this year, not to discount last year’s, of course. The team responsible for putting the event together worked very hard to make this event possible — recruiting performers, advertising the event, and setting up the stage hours before the performance. It was exhilarating to be a part of such a great project.

Our performances this year ranged from singing and dancing to a Quiz Bowl demonstration. Students displayed the talents that they have been cultivating out of school, and put them on display for the school to see. I had a personal performance, which was a lot of fun. Not having decided on what performance I wanted to make until days before the actual Coffeehouse event, I had very little time to practice, but I also wanted my performance to be as funny as possible. The less prepared I was, the more fun I could have by improvising. But I still wanted to be prepared enough to be coordinated to make it through my performance.

If I had to put is simply, it was just me yelling the lyrics to the Duck Song by Bryant Oden while strumming the chords to it on guitar. It was a performance fitting of my personality, and it was something I knew before going on stage would be both entertaining and something I could pull off. In fact, in the middle of the song, I stumbled, but I kept strumming and I joined in the lyrics when I came to a familiar part (it’s a repetitive song — there were many of those). It was a complete accident; I just laughed it off along with the rest of the audience. It wasn’t too scary of a mistake, as I knew that within our school community we are supportive of each other, and help each other up.

Although my performance was fun, I couldn’t possibly leave out the tribute we, the juniors, paid to the soon-to-be-graduates. Over the years, we spent time together in many of the same classes and developed strong friendships with many of them. As such, we thought that it would be fitting to create video montage with some of our favorite memories we had made over the years. And of course, we had to play some sentimental music in the background, just so that we could make them feel sad to leave us too.

Overall, it was a pleasant surprise to see how passionate my peers were about their individual arts, and a joy to see how much fun they were having on stage. We donated many cans as a result of the Coffeehouse, and we’re sure to keep this event as a tradition for many years to come. While the event served many purposes, it undeniably brought the students and faculty within BASIS Independent McLean closer together.