The middle school science curriculum at BASIS Independent is expansive, breaking down the sciences into the core disciplines of chemistry, physics, and biology, each taken three times per week throughout the year. The following post demonstrates just one of the many creative ways in which BASIS Independent teachers guide students toward subject mastery.Additionally, teachers and students alike find joy in the spontaneity of finding new ways to collaborate with each other...and perhaps start new school traditions.

In biology, students just wrapped up a unit on functions and parts of cells, a fairly complex topic. Dr. Angela Hahn, Subject Expert Teacher for 6th, 7th and 8th grade biology and chemistry at our sister school in Brooklyn, works daily to break down complex subjects not typically seen until high school in American schools (or even college) to make them comprehensible to the 12 year old mind.

Dr. Hahn is, as all BASIS Independent teachers are, a firm believer that if a student really ‘knows’ something and they can teach it to someone else, in their own words, then they have mastered it.  This simple concept is the genesis of what came to be an experiment in what it means to be a student – and a teacher – for BASIS Independent 7th graders.

The Challenge Is On!

As Dr. Hahn wrapped up her cell unit with the 7th graders, she encouraged her students to try to explain cells to their grandma. Not too tough, right? Grandmas are so wise. But, the fact that grandmas are so wise may not pose much of a challenge – and that’s when it hit her, “Actually, I’d like you to teach it to Kindergarteners.” The room fell silent as she finished with, “The Kindergarteners will be quizzed on the material that you teach them, and your final grade will be a reflection of their performance.”

All it took was that four-letter word “quiz” to kick the 7th graders into gear:  how do we simplify such a complex topic? Dr. Hahn knew they would think it would be a fun activity, but she never anticipated what would happen next. 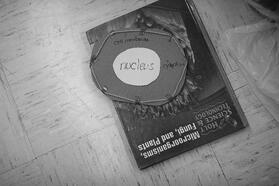 KThe student-teaching-student idea was left to bake with the students over the Thanksgiving holiday break, giving them ample time to brainstorm and come back to the classroom with some ideas. Even though they were not formally assigned to put together a plan for teaching the Kindergarteners while on break, they returned to class with much more than just ideas. “One student came back from break with an entire packet of customized learning material for the Kindergarteners,” Dr. Hahn says. “His enthusiasm definitely inspired other students to think outside of the box. I was impressed.”

As school revved back to life after Thanksgiving, Dr. Hahn met with fellow Brooklyn Kindergarten specialized teacher Michelle McLaughlin to plan out the student-run cell lesson. “I was thrilled when Dr. Hahn approached me with the idea,” she says. “When I told the class that the 7th graders were going to teach them about cells, they made requests to have a lesson on atoms – before we even got started.”

Each armed with self-generated lessons which spanned dioramas, art, music and whiteboards, the 7th graders marched down to the Kindergarten classroom, paired up with one or two students, and got to work.

After 25 minutes of teaching and learning, the results of Dr. Hahn’s idea were made clear when a 7th grader noticed that a Kindergartener had latched onto his leg, begging him to teach more! “I was ecstatic to see my class so eager to learn,” says Ms. McLaughlin. “They were very attentive, calm…showing restraint, yet coupled with excitement.”

Just how excited were the Kindergarteners? “One of the 7th graders wrote a song about cells, and the next day it was being taught to me by my Kindergarteners.” She continues, “they were explaining DNA to me, in their own words!” And they haven’t stopped talking about it.

The lessons to be learned from this experiment went beyond proving that our 7th graders understand cells. A genuine bond was created between these groups of students; the Kindergarteners feel like they now have someone older they can reach out to.

Being in the teacher’s shoes helped build confidence in the 7th graders.  They felt ‘cool’ because they were masters of their subject, and saw the value in helping others and think creatively while doing so. “We definitely plan to continue this practice,” says Dr. Hahn. However, she has her sights set somewhere else for the next phase in her student-teaching lesson plan for cells:  parents. “Once they have taught it to their parents, I will know they have mastered it.”

And about that quiz… They ALL aced it! 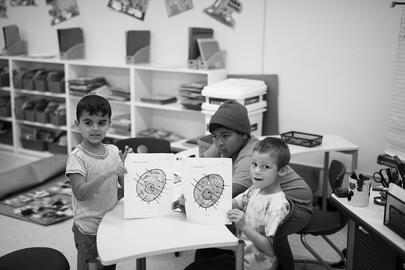 **UPDATED 10/15/15** The experiment lives on! This year the Brooklyn 9th graders paid a visit to the Kindergarten class. For pictures, head on over to their Facebook page to view the album.

To learn more about becoming a student at BASIS Independent McLean, join us for an informational event, or sign up to receive admissions alerts!