What's so great about being a founding family?

At one of our recent Open Houses held at our sister campus BASIS Independent Brooklyn, one theme stood apart from others – how great it was to be a founding family. For those in attendance who joined BASIS Independent Brooklyn from day one, not only was the transition way easier than originally thought, but it was also abundantly clear how lucky their children were to transition with, well, an entire group of kids who were also transitioning.

“All the kids were starting together – and even the parents,” said Josielyne 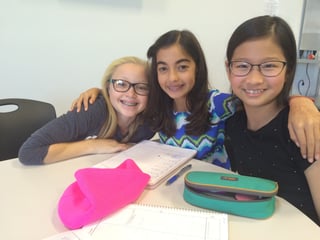 Pacifico a founding parent at BASIS Independent Brooklyn with two children who started in kindergarten and grade 3 and are now in grades 3 and 5. “It created a strong bond and camaraderie between us all that has now lasted three years.”

“For all the kids, the advanced curriculum at the school was new, and they were all experiencing it for the first time together,” continued Josielyne. “It fostered a collaborative and supportive environment as the kids went out of their way to help each other get up to speed. There was no feeling of playing catch up to students who may be more used to rigorous science classes or may have better organizational skills. The kids supported and encouraged each other and we continue to see this even now.”