If you have attended a BASIS Independent Manhattan information session you know that one of our biggest goals is to guide our students in making connections across all subjects. By pairing passionate teachers with the automony to create engaging lessons, we have the perfect equation which results in incredible "Ah-ha" moments. Originally published by BASIS Independent Brooklyn, the blog post below showcases how one subject expert teacher dynamically bridges the gaps between Art, History, and Engineering.

Just recently, BASIS Independent Brooklyn sixth grade students were challenged by our newest Visual Arts faculty member, Mr. Opirhory, to step into the shoes of Neolithic humans. Students broke into teams and began exploring design elements of Neolithic structures using only materials available at the time. The project fell on the heels of their History unit on early river civilizations. The idea was to make connections across classes and bring to life the challenges communities faced moving from nomadic life in the Paleolithic Era to agricultural living in stationary structures in the Neolithic. “Instead of just showing students, I wanted them to do it,” said Mr. Opirhory. “They were challenged to work in a group, to see how difficult it was to create something functional. I thought all the structures would look very similar, but they are all unique and very fleshed out.”

Student teams researched Neolithic design techniques and Mr. Opirhory discussed building methods such as the waddle and daub. They revisited post and lintel concepts that are often first touched upon in early engineering classes at the school. Then Mr. Opirhory facilitated a discussion of materials that would have been available in the period – clay, dirt, stone, lumber, woven materials – that the groups used to create.

“My belief is that art is not something tied to a preconceived notion of a painting,” said Mr. Opirhory. 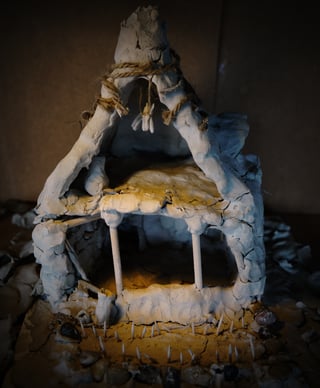 “What we view as art can also be functional. Art is in the creation, function and beauty.”

Next up for students is Egyptian art history. Mr. Opirhory will familiarize the class with the Narmar Palatte. After that, he will challenge them to create five sentences in ideogram hieroglyphics describing how each student became a pharaoh or God. Learn more about BASIS Independent Schools in New York City and the other schools around the country by visiting basisindependent.com.

Join us at our upcoming November 5th Open House in Brooklyn to see for yourself what all the buzz is about!