BASIS Independent Brooklyn first graders recently delved into the concept of pyramids and how they are constructed below their iconic surface. Students, through the guidance of Engineering Subject Expert Teacher, Ms. Hagan, designed and built replicas of structures hidden beneath the surface of a pyramid to showcase what they had learned during their section on Egypt. They walked away with a sense of pride for their projects and a better idea of the inside of a pyramid.

Excited discussions of “false passages” and “queen’s chambers” echoed around the engineering classroom last week as first grade students began to build interiors of their Egyptian pyramids. Under the guidance of engineering subject expert Ms. Hagan, students began to create their own interiors after learning for weeks about ancient Egyptian history and the unique structures intricately linked to that civilization. Ms. Hagan had worked closely with the first grade learning environment teachers, particularly Ms. Gifford, and humanities instructor Ms. Lavely to develop the student project. 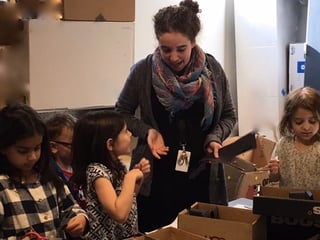 “The idea of exploring the inside of pyramids came from a question one student asked in my class,” said Ms. Gifford. “He wanted to know how far underground pyramids were built, since he was thinking of the structures as graves in a graveyard. We thought it would be great to explore this further with the whole class. Almost all kids are familiar with the outside of pyramids, but they have not given much thought to what can be found below the surface.”

Ms. Hagan shared with students 3D images of pyramid interiors created be scientists who used cosmic-ray detectors and 3D scans with lasers, and these images revealed the complexity of the interiors down to hidden passages (click here for more information). The idea was to expand students' views of pyramids below the surface, so they would have reference points for their own designs of ascending/descending stairways, passages and chambers.

“I wanted to get the students into the idea that we were designing structures with twists and turns,” said Ms. Hagan, one of the newest engineering faculty members at BIB. “My students are in first grade, so they needed something familiar to focus on and then create. I suggested they think of a maze to help ju 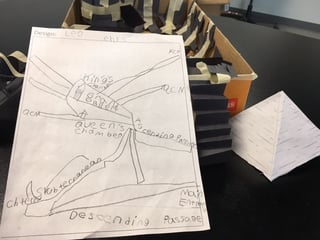 mpstart the design process, and the students ran with it.”

Each student first plotted out the interior of their pyramid with a design sheet and worked in reference to it. While the teachers thought this would be challenging for the class, what they found was that students were very careful to reference the design sheets and replicate their plan using paper strips in boxes to construct passages, staircases and walls.

Ms. Gifford, who spent 10 years in civil engineering before transitioning to teaching, trained the students on ways to fold paper to make the passageways in the pyramid interior. The resulting projects are a source of pride for the students and teachers alike.

Topping off this section on Egypt was field trip to the Brooklyn Museum for our first graders, who were 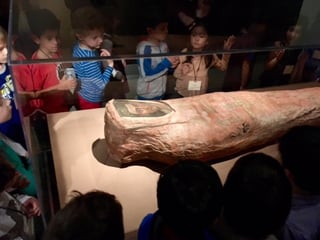 very eager to see the collection of Egyptian artifacts that now meant so much more to them than the usual museum displays. The hands-on pyramid design lesson helped spur creative problem-solving and spark genuine interest in ancient Egyptian culture.

Learn more about BASIS Independent Manhattan and the other schools around the country by visiting their website at basisindependent.com.