As the country took part in last week’s presidential election, our kindergarten students here at BASIS Independent Fremont were learning about elections, leadership, and civic responsibility.  During their civics lessons throughout the week, students learned vocabulary about Election Day, created their very own Liberty Bells, and had history lessons focused on American presidents.  As students learned more and more about the electoral process, they were encouraged to think about what made someone a good leader and a good president. 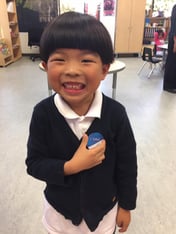 At the end of the week, students were asked to vote for either Farmer Brown or Duck for president.  Just like in a “real” election, students received “I voted!” stickers, which they were proud to wear for the rest of the day.  Duck won in a landslide!