During information sessions and family meetings, I’m often asked what makes BASIS Independent Fremont, or BASIS.ed-managed schools more generally, different from other schools. My answer is always the same: we hire amazing teachers who are passionate about teaching their subject, and we believe that students should be participants, not spectators, in the classroom. Nothing better exemplifies this approach to education than the BASIS.ed Senior Projects. 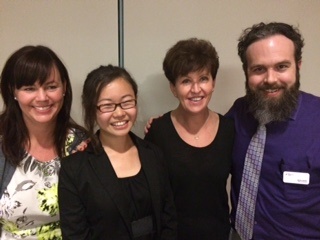 As an educational organization, we recognize the transformative power that comes with pursuing intellectual passions. Our students are taught by people who love what they teach, and by the time they are seniors, our students have been taught by these inspiring, amazing educators for many years. Having had this experience, it is only natural for them in their senior year to take a trimester to explore a topic that is of genuine interest to them. The Senior Project, which allows our seniors the opportunity to develop and complete independent research off-site for the entirety of their third trimester, is also an incredible example of students participating, and not simply sitting on the sidelines as spectators.

I was fortunate enough to be able to travel to Arizona a few weeks ago to meet with seniors who had participated in the Senior Project, and to watch them give their final presentations. I was so incredibly impressed by what I heard and witnessed; the students I spoke with (and I spoke with a lot!) were some of the most poised and polished young adults I’ve met.

In talking with them about their experiences, a few common themes emerged. Nearly all noted that they had learned resilience and grit as a result of their project—they had moments of failure, of projects going off track, of external advisors not following through on their commitments. They learned in these moments that they had the ability to dig deep and course correct, and, as one student from BASIS Scottsdale noted, she learned how “to recover from failure.” For most students, the Senior Project also represented a chance to “test drive” the subject they were intending to study in college. While many students emerged from the project more convinced than ever of their intended major, some knew they needed to consider alternative fields by project’s end.

Every student with whom I spoke felt more confident of their abilities to thrive in college as a result of their Senior Project experience. The project was a crucial step in preparing them for the independence of college life.

As I sat in the audience watching the students deliver their final presentations, I was once again struck by how professional and accomplished these students were, and, perhaps more importantly, how humble they were about their achievements. One student described creating a hybrid novel for his project—he wrote the text of the novel, drew images that would be included in the book (and these were beautiful illustrations!), and then composed his own music to accompany the multimedia presentation. This was a seventeen-year old!