A Day In The Life of a Seventh Grader

This year, BASIS Independent Fremont has grown to include a seventh grade, and we are well on our way to implementing the proven BASIS Curriculum middle school method. But what does a typical day look like for our middle school students? We followed a couple of them around to find out! 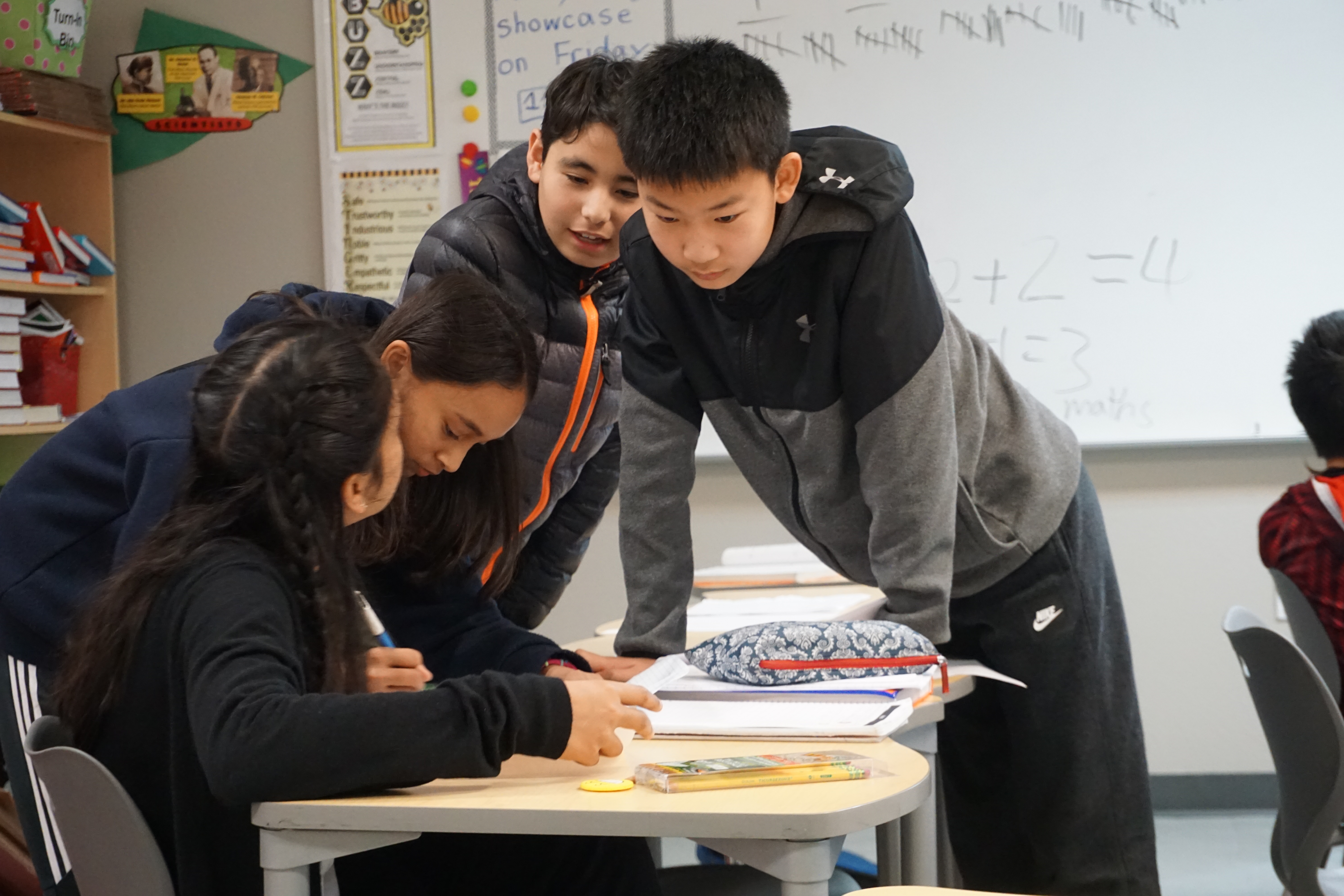 It’s a Thursday morning, and Raagini’s day is beginning with Spanish class, her language elective. In seventh grade at BASIS Independent Fremont, students can choose to take Spanish, French, Latin, or Mandarin to fulfill their language requirement. Spanish class with Ms. Lapres begins with a Do Now assignment, an assignment written on the board for students to commence independently upon arrival in class, asking students to pick out the errors in several sentences that are being projected onto the board. Next, students play a game of Guess Who? in Spanish as a way to review vocabulary words used to describe one’s appearance.

Raagini’s second class of the day is Algebra I, where Ms. Rangoli introduces the power rule for exponents and shows how it directly builds off the previous lesson. Students complete a few practice problems, then have the opportunity to correct their returned tests in groups so they can peer review the older materials together. 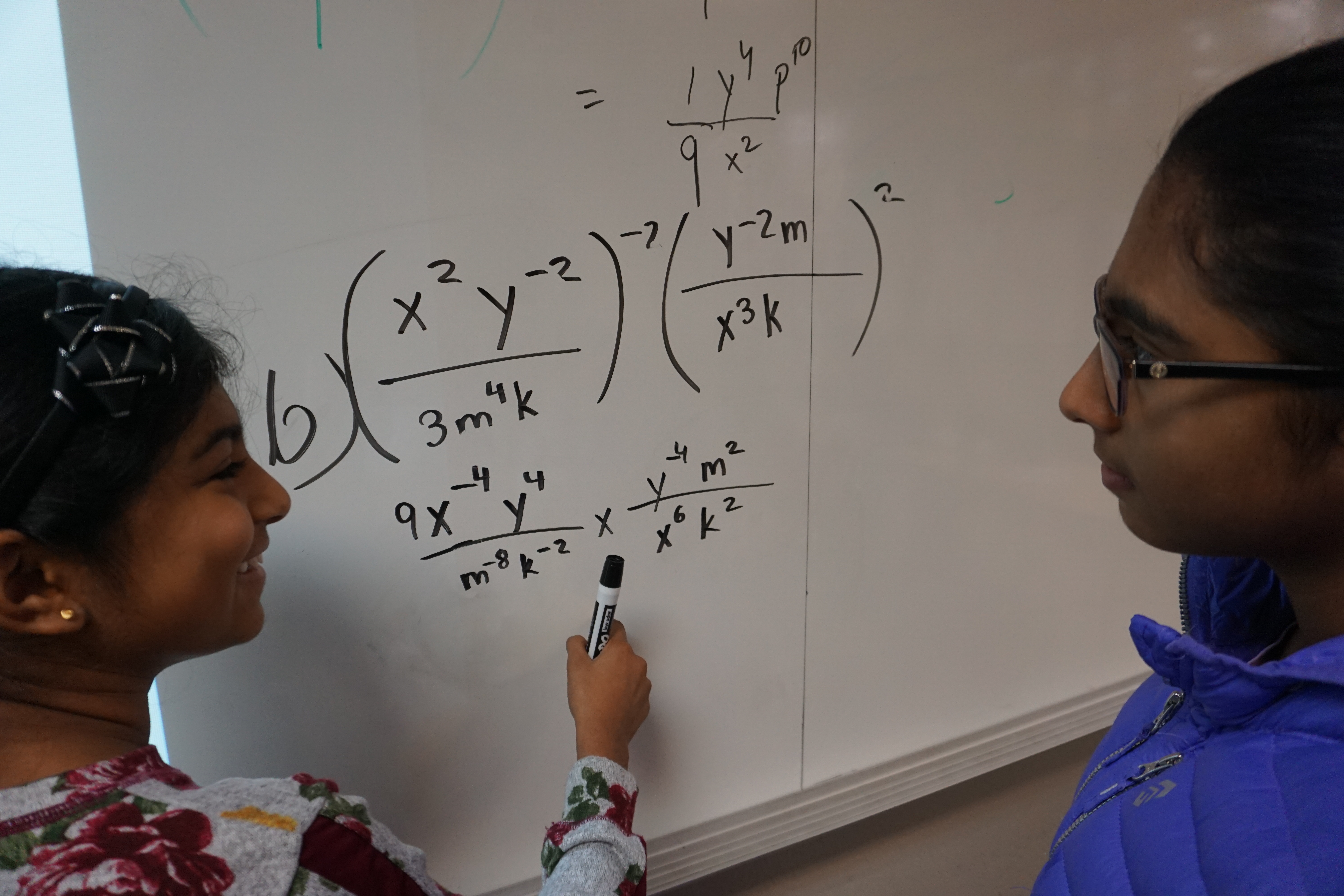 “I don’t have a favorite class right now,” Raagini says. “Wait—Bio!” It’s her third class today, and the lesson is all about plants. Students are building off their knowledge of cells and the structures therein by digging into different organic subsets of the natural world. Today, this manifests as learning about stomata, the cells that regulate water evaporation in plants, and the process of photosynthesis and how plants absorb blue and red light from the sun to use as energy to power themselves. 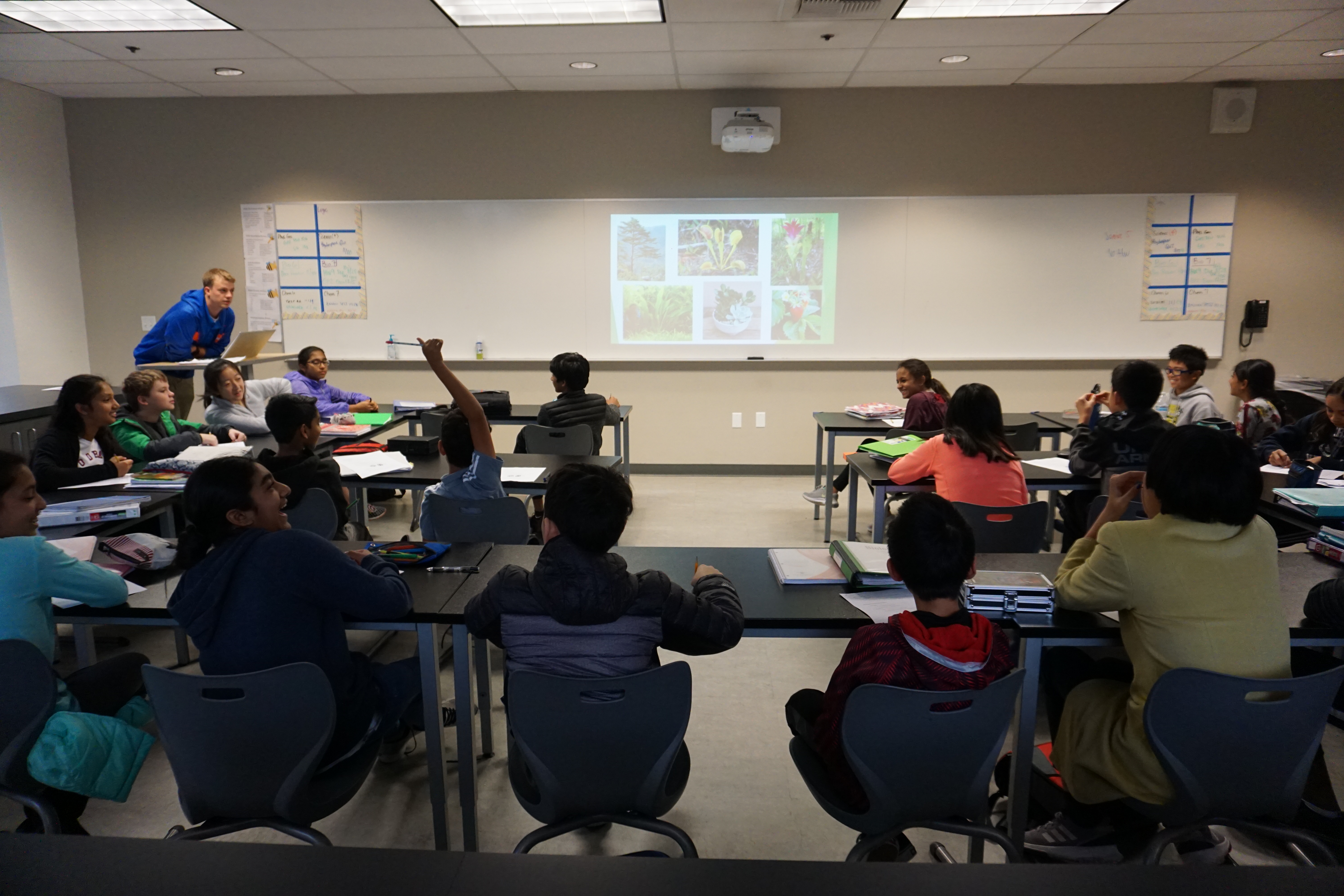 Mid-morning, seventh graders have a short class called Academic Enrichment. This class is an opportunity for the teacher to review material that may be useful, or for students to have time to organize their work and study for subjects at their discretion. Mr. Francher, the Director of Academic Programs, is teaching today’s class to prepare students for the upcoming pre-comprehensive exams. The pre-comprehensive exams are the mid-year assessments the BASIS Curriculum Schools give to students grades 6-8 to determine their mastery of the year's curriculum progression. This is followed by the comprehensive exam, which measures the year's worth of knowledge before the end of the school year. 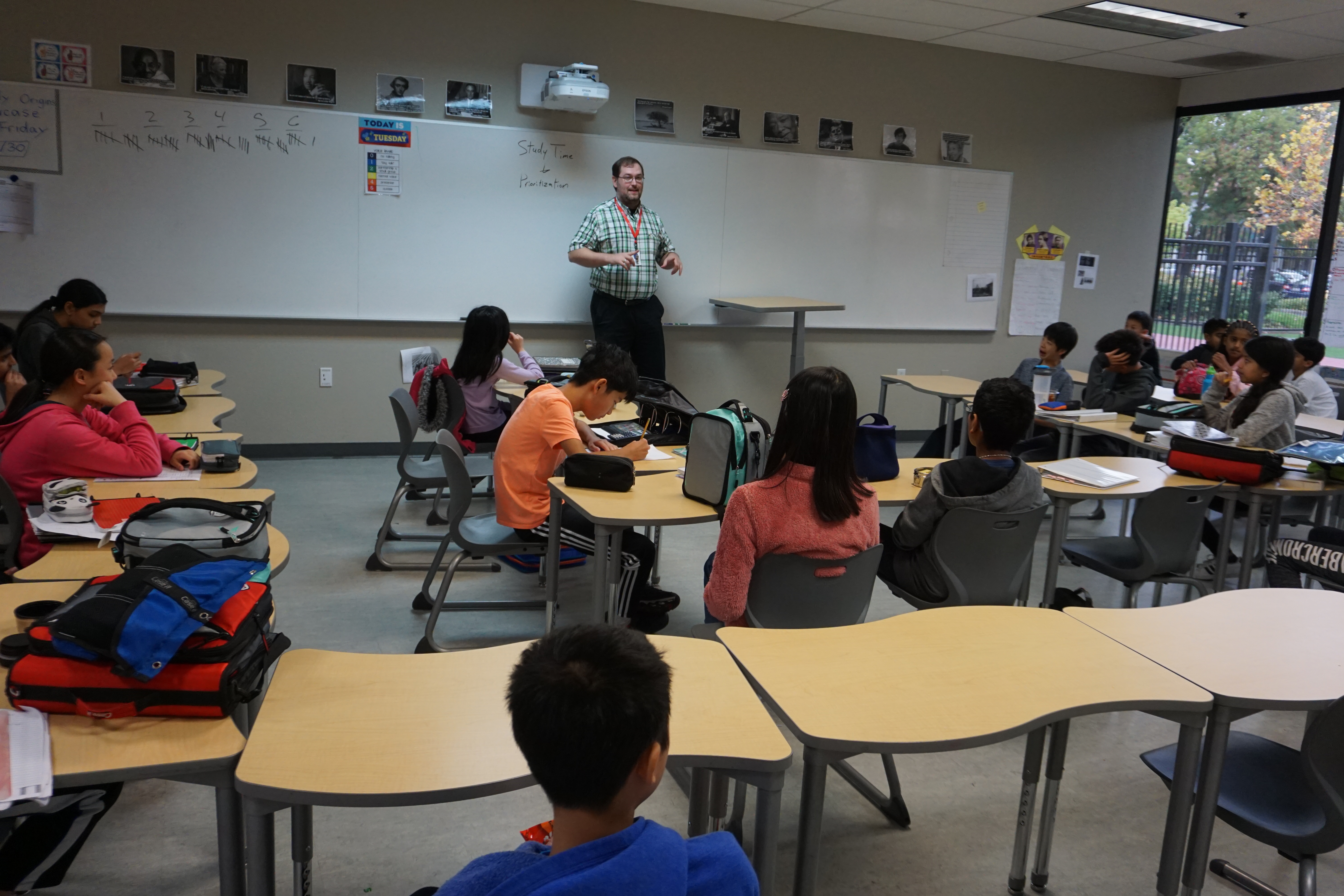 “What’s the maximum number of time you should spend studying one subject?” he asks the class.

“An hour?” a student replies.

“No!” he says. “Twenty minutes!” The students gasp.

“Cramming does not work!” Mr. Francher continues. “If you study a subject for twenty minutes, stop and move onto another subject. You’ll absorb more information and you won’t get bored.”

Among themselves, the seventh graders discuss the subjects they want to focus on studying for pre-comps. Everyone has a different area they want to work on.

“Study with your counterpart,” Mr. Francher reminds them, as they all have different strengths and areas they want to work on.

After Academic Enrichment, Raagini has US History, where tests are being handed back. 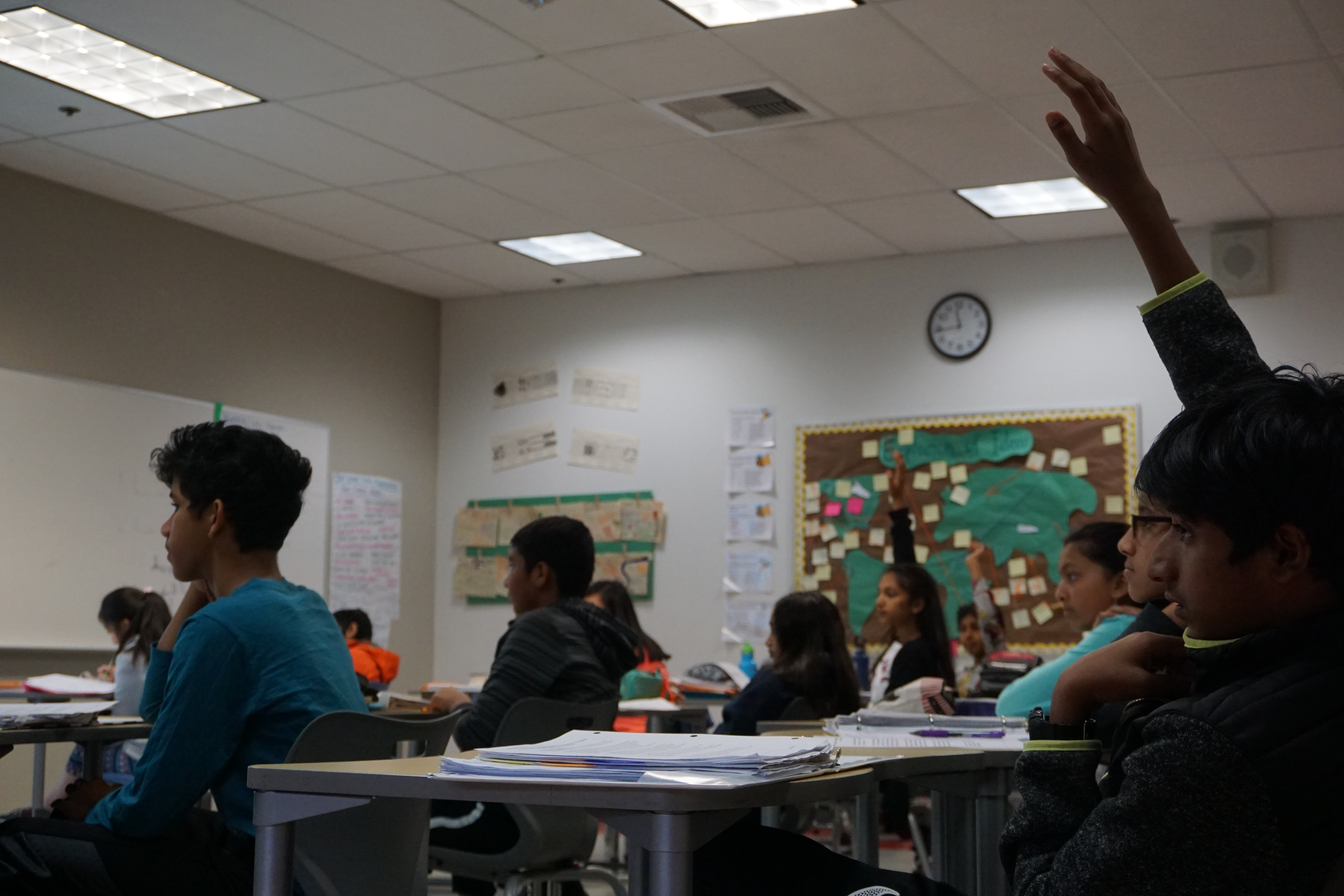 “I don’t expect you to get every question right,” says Dr. Monkman, “but I do expect you to make an effort.” She reminds the students that they have options to attend student office hours and complete study guides before exams if they feel they don’t have a firm grasp on the material.

In the lesson of the day, the class discusses first- and second-hand sources.

“Can we trust this source?” Dr. Monkman asks the class, after they read a note about a meeting with Frederick Douglass, written thirty years after the fact. “Why? Why not? Just because it’s a primary source doesn’t mean we can trust what it’s saying.”

The students go on to discuss extreme abolitionist John Brown’s raid on Harper’s Ferry. Was his violence justified?

“He had the right intention, but he went about it the wrong way,” says Rahul.

“It’s a way, but it’s not the best way,” agrees one of his classmates.

At lunch, the popular topic of conversation is the afternoon’s elections for National Junior Honor Society (NJHS) leadership positions. Several students frantically scribble speech ideas onto bright flash cards, but others are eager to talk about something else, and jump at the chance to discuss their favorite classes.

“Creative writing!” says Esha, “because it’s like a club, and I love writing—it’s like [Ms. Villanueva, the Subject Expert Teacher] is part of the class!”

“English!” says Laasya, “and Biology. I like Biology because I want to be a doctor. I like English because I get it. I like art because it’s all about expression.”

“Dr. Dixit’s class [Physics], because she always helps us!” says Annie, looking up from her NJHS speech draft.

After lunch, the NJHS students convene for their first meeting in a conference room. Ms. Julie, the Dean of Students for the middle school, explains the leadership election process. 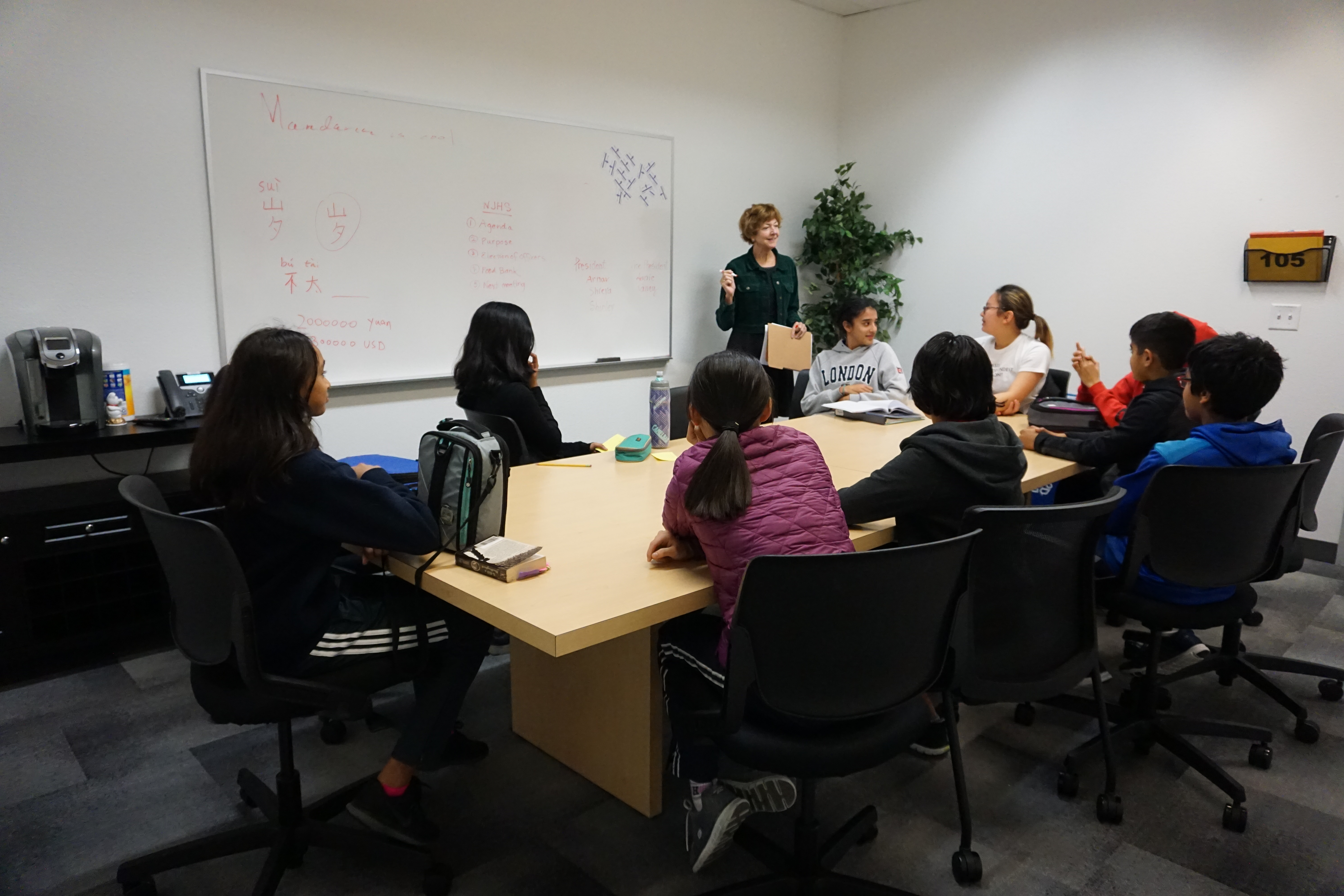 “Pick something you feel a calling for, not just whatever’s available,” she urges, as students begin to nominate one another for the four available positions.

“I want to be friends with you all and work with everyone to make things happen,” says Shreya, giving her case as a presidential candidate.

Annie’s speech for her vice president nomination includes a desire to help others create a more intentional work ethic, and Ada’s bid for secretary emphasizes her neat penmanship. The students vote and begin to plan for their role in the holiday food drive.

It’s the afternoon, and we follow Ada’s schedule for the remainder of the day. First, she has Logic with Mr. Betcher; today, the students are learning about using analogies in arguments. Mr. Betcher explains an analogy comparing humans and androids, and is bemused to learn that none of the students recognize the image of Data, the android from Star Trek: The Next Generation, that has been included adjacent to the analogy on the day's presentation. 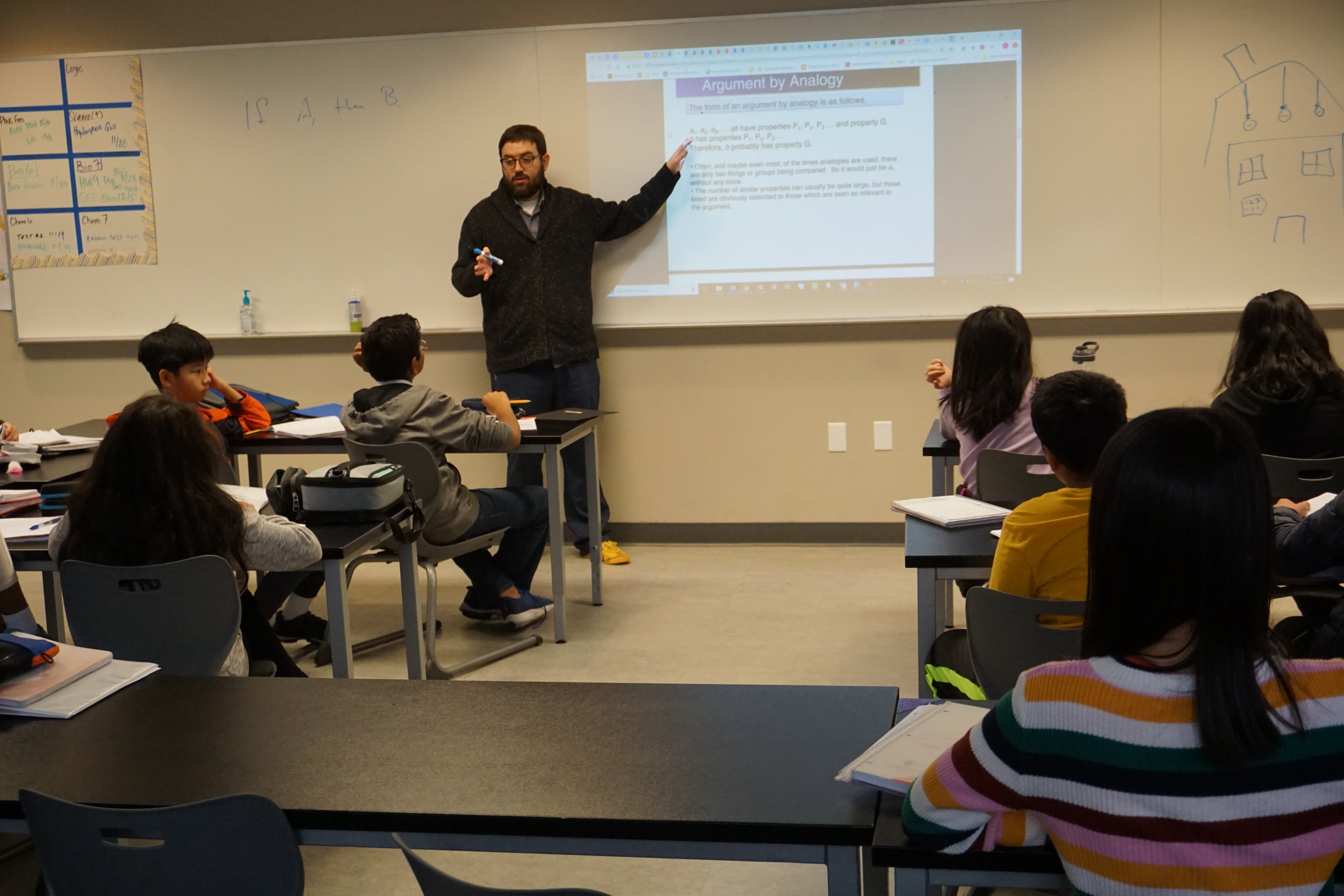 Next, it’s time for Visual Art with Mr. Harter, where the students are independently working on painting designs onto skateboard decks.

“If you are using lighter colors in your design, you might want to add additional layers of color to make them brighter,” says Mr. Harter at the start of the class, going over tips for strengthening the aesthetic of each design. 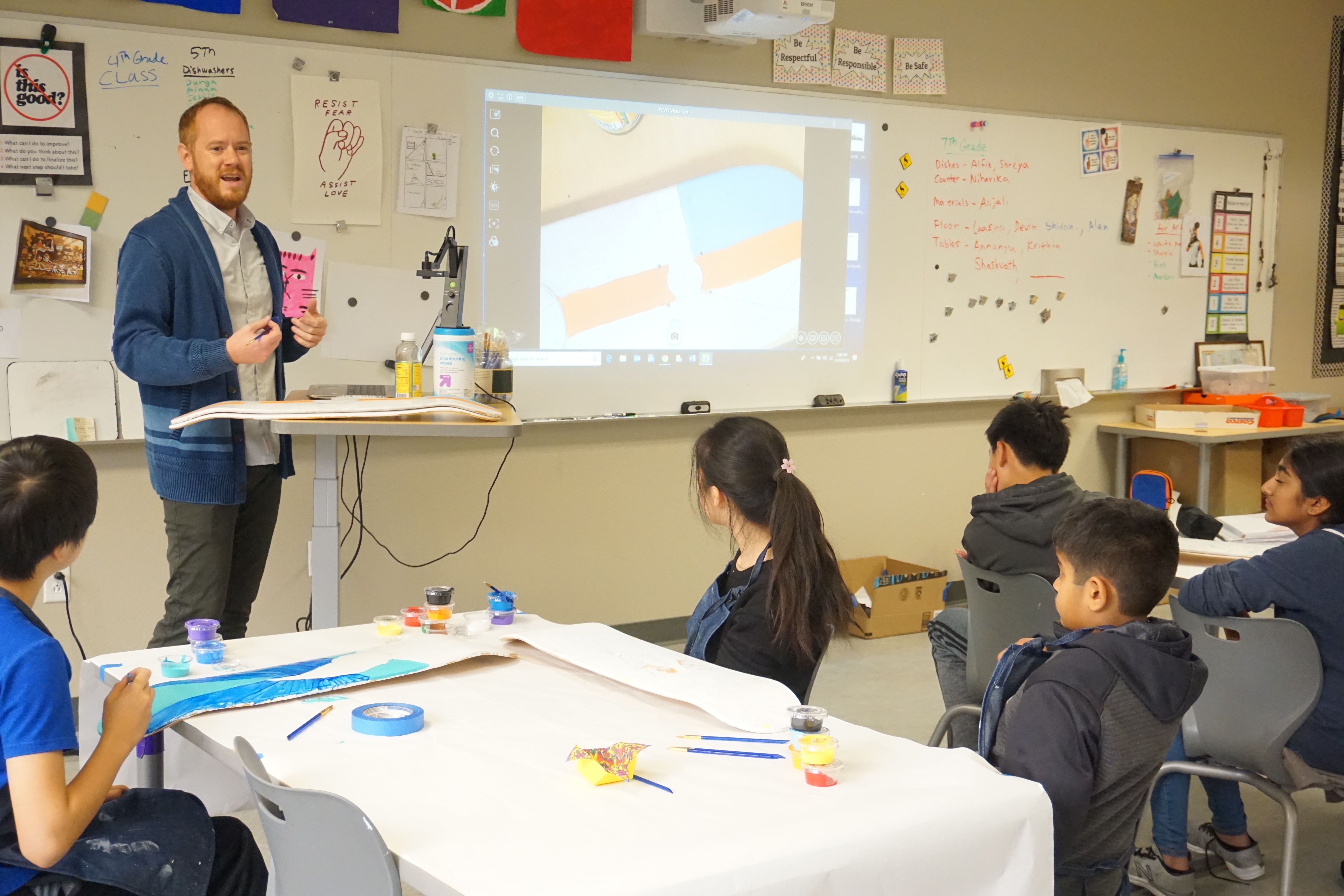 “What are some of the challenges you’re faced with in this project?” he asks.

“Time,” Ruoqing promptly responds, and the other students agree.

“Yes, time is a big challenge for artists,” concedes Mr. Harter. The students resume work on their decks as rare California rain falls outside. 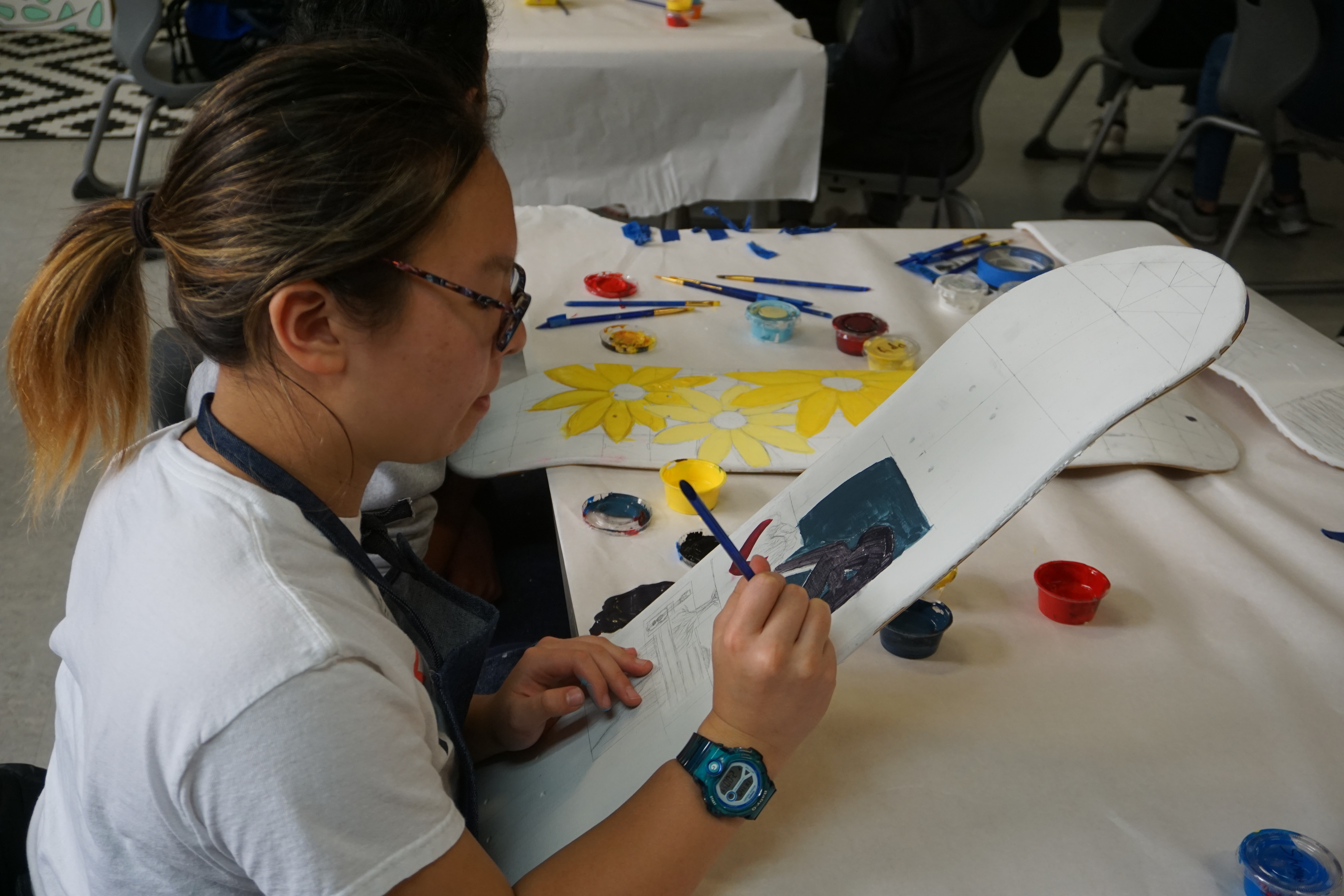 Ada’s next class is US History with Dr. Monkman, while down the hall, Raagini is in English class annotating chapter ten of To Kill A Mockingbird.

For the last class of the day, an optional elective, Ada has Physical Education with Coach Andy. A unit on rugby has recently begun, so the students spend the majority of the time running passing drills in pairs to practice defensive and offensive positions.

On one of Ada’s turns to run offensive support, her partner passes the ball back to her and Ada deftly catches it. Her classmates shriek with surprise and cheer as she dashes towards the end of the gym to score.

At the end of the day, we catch up with Raagini and Ada.

“Today was a pretty typical day,” says Raagini, “but we got a lot of tests back since it’s just after a break.”

“Today was the first meeting of the NJHS,” Ada adds, “so that was exciting.”

Even a typical day as a seventh grader can be full of surprises.

Sign up for our interest list and receive information about upcoming events, key admissions dates, program details, and more.

Reflections of Gratitude from the BASIS Independent Fremont Community

What to Expect at Your Virtual Entrance Exam

What to Expect at Your Virtual Play Date