AP Scholar awards recognize students who have demonstrated both a depth and breadth of knowledge and whose work has shown college-level mastery across multiple disciplines.

During the quiet months of summer, I take time to reflect on the past year. 2018–19 marked a milestone year. Our school "turned five," and our first class of seniors graduated in June. Throughout the year student accomplishments across all grades also continued to reaffirm the vision behind all that we have built here in Brooklyn. 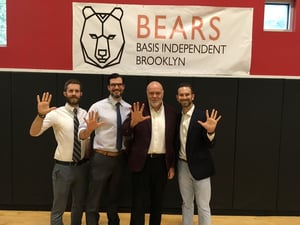 doors first opened and those who have joined us along the way. No matter what year you began, you were—and are—intimately part of raising a school. As we like to say, “a school grows in Brooklyn,” and with it so many children and professionals. Betty Smith’s seminal work, A Tree Grows in Brooklyn, serves as an iconic example for the school. We—like the characters in the book—have grown together and developed our community by facing common challenges and sharing in joys, successes, and celebrations. Like the symbolic tree, we have set down roots in order to preserve our ties to each other.

Approximately sixty percent of our 2017–2018 high school students have earned an AP Scholar award, recognition from the College Board based on their performance on their 2018 AP exams. Additionally, the National AP Scholar award is typically the highest honor granted to a student before graduation and is granted to less than 1% of students nationwide. We are proud to share we have four National AP Scholars in our senior class comprised of 16 students.

AP Scholar awards recognize students who have demonstrated both a depth and breadth of knowledge and whose work has shown college-level mastery across multiple disciplines.

Every summer once the halls are quiet, I spend time reflecting on the school year. 2017–18 was a year defined by extremes, since it encompassed challenging times that placed schools in the national headlines, as well as many exceptional accomplishments on our campus. My note will focus on the great news that deserves celebration, since I want our student accolades to receive the recognition they deserve from the entire BASIS Independent Brooklyn community.

Across the country this past school year, student voices rose to make an impact, and our community joined in proudly. High school students, with the help of faculty adviser Ms. Das, established our Leadership Club that set the stage for organizing school social events as well as student activism.

2018 State of the School Address

On a rainy Saturday evening right before Mother's Day, our parents gathered on campus to socialize and hear Head of School Hadley Ruggles present her annual State of the School address. It was an opportunity to relax together and celebrate student accomplishments while looking ahead to the future and upcoming academic year.

Below, we've included several excerpts from the State of the School address:

"As a school, we have much to celebrate. In the past year, we won second place in New York City’s Science Bowl, coming close to defeating the reigning champions of several years. One middle school student not from our school described our team as 'the crowd favorite' for being the new team to take on the old champs!"

"We sent our first debate teams to city championships and to state championships, where our 8th grade students (who were granted special exception to compete against much older students) earned 4th in the state."

"Our girls’ volleyball team continued their streak of athletic success, and joining their ranks; our boys’ basketball team also made it to play-offs. These accomplishments serve as a few highlights among many more—accomplishments at all grade bands and disciplines."

Nikita P. is just seven years old, but she has already started establishing a major presence in the performing arts world. Last month she was awarded first place in the Rondo Young Artist piano competition. Part of her prize is the opportunity to perform at Carnegie Hall! Read on to hear from her parents about nurturing a child's musical ability and to find out more details on her upcoming May 2 performance.

Excellence On and Off the Ice

The sports program at BASIS Independent Brooklyn is growing with our championship volleyball team and new programs underway for Ultimate Frisbee and even competitive co-ed soccer and basketball this spring. However, many of our students play on teams outside of school. One such student, Murphy K. in grade 8, just qualified for the New York State Championship with his travel hockey team, the New York Cyclones.

The New York Cyclones started playing together six months ago and wrapped the season up this past weekend in Buffalo at the New York State Championship. While the team won’t be moving on any further, they fought all the way until the final buzzer of the season. As a defenseman, Murphy (#71) was proud of his play during the Championship Tournament, limiting goals scored against his team to only one while he was on the ice.