2018 State of the School Address

On a rainy Saturday evening right before Mother's Day, our parents gathered on campus to socialize and hear Head of School Hadley Ruggles present her annual State of the School address. It was an opportunity to relax together and celebrate student accomplishments while looking ahead to the future and upcoming academic year.

Below, we've included several excerpts from the State of the School address:

"As a school, we have much to celebrate. In the past year, we won second place in New York City’s Science Bowl, coming close to defeating the reigning champions of several years. One middle school student not from our school described our team as 'the crowd favorite' for being the new team to take on the old champs!"

"We sent our first debate teams to city championships and to state championships, where our 8th grade students (who were granted special exception to compete against much older students) earned 4th in the state."

"Our girls’ volleyball team continued their streak of athletic success, and joining their ranks; our boys’ basketball team also made it to play-offs. These accomplishments serve as a few highlights among many more—accomplishments at all grade bands and disciplines." 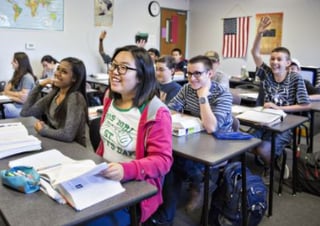 well-regarded PISA exam on Tuesday, December 6, and American students’ scores stagnated in Reading and Science, while continuing to drop in the other tested subject, Mathematics.