BASIS Independent Brooklyn upper school students visited Milkmade scoop shop at 204 Sackett Street on the first day of Project Week. The adventure was part of the "Ice Cream & Books" project this past June. Students visited local small businesses, interviewed their owners about the challenges and benefits of starting and maintaining a small business, sampled the goods, and wrote reviews and/or business plans in response to what they learned and experienced.

8th grader Nia P. wrote a glowing review of Milkmade Ice Cream Shop that we thought would be great to share with families this summer.

The ice cream at this cutesy Carroll Gardens ice cream shop is absolutely delicious and left many wanting more. The flavors are thoughtfully and skillfully created and are beautifully unique. Some examples of the flavors there right now are: Prospect Perk (coffee ice cream with gobs of chocolate chip cookie dough mixed in) and Mermaid Parade (seaweed ice cream with chocolate shells mixed in). 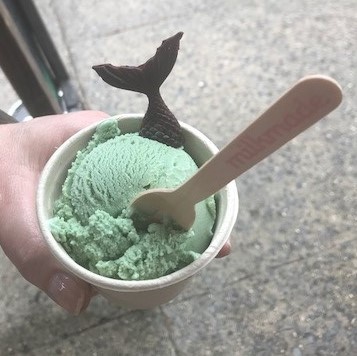 When I went to the shop, I had the Midsummer Nights ’Scream in a blue corn cone. This particular flavor is a vanilla base infused with elderflower and other herbs, and the cone wasn’t like anything I’d ever tried before. It tasted sort of like crunchy corn bread, and it was bright blue. In my opinion, the combination of the sweet ice cream with the salty cone was perfect!

Each month, according to the owner and co-founder, Diana Hardeman, Milkmaid comes up with a new ice cream flavor. Diana says the tries to incorporate local ingredients and foods into her ice cream as well as fruits and produce that are in season. Diana illustrated an example of this for us by telling us that with a flavor like “Cobbler Hill” (a flavor with chunks of crumble and fruit mixed into a vanilla base), she changes up the fruits according to what’s in season at a specific time. If plums are in season, she’ll make plum cobbler ice cream; if blueberries look fresh at the farmer’s market, she’ll use blueberries in that flavor. The milk maids not only use dairy from local farms, but they also pasteurize all their milk in house. 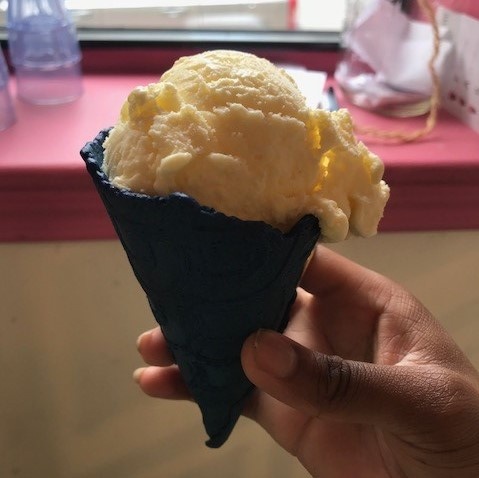 Diana is a hardworking woman who attended business school at NYU before she started making small batches of ice cream in her New York City apartment. It wasn’t long before people were eager to taste her super-special ice cream, and she came up with the idea of starting her own ice cream subscription business. She met the increasing demand by moving out of her own kitchen and renting space in commercial kitchens, where she could produce her ice cream on a larger scale.

This shop is definitely worth visiting for a special occasion! 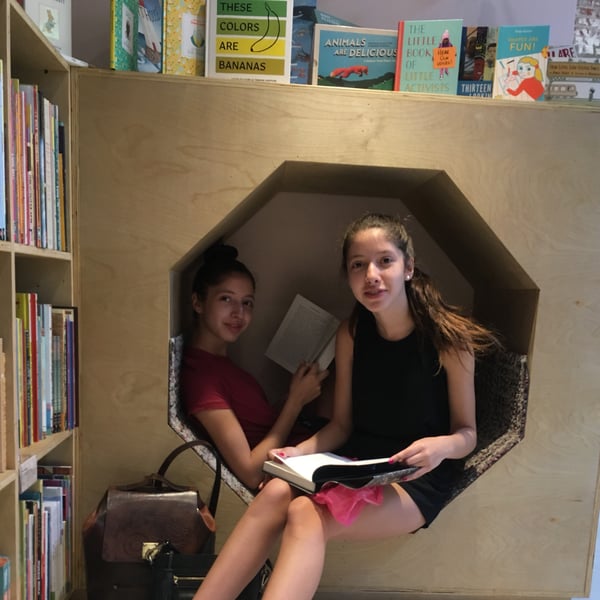 Above: Students visiting Books are Magic on Court Street as part of Ms. Kertis' "Ice Cream and Books" Term Project.