Excellence On and Off the Ice

The sports program at BASIS Independent Brooklyn is growing with our championship volleyball team and new programs underway for Ultimate Frisbee and even competitive co-ed soccer and basketball this spring. However, many of our students play on teams outside of school. One such student, Murphy K. in grade 8, just qualified for the New York State Championship with his travel hockey team, the New York Cyclones.

The New York Cyclones started playing together six months ago and wrapped the season up this past weekend in Buffalo at the New York State Championship. While the team won’t be moving on any further, they fought all the way until the final buzzer of the season. As a defenseman, Murphy (#71) was proud of his play during the Championship Tournament, limiting goals scored against his team to only one while he was on the ice. 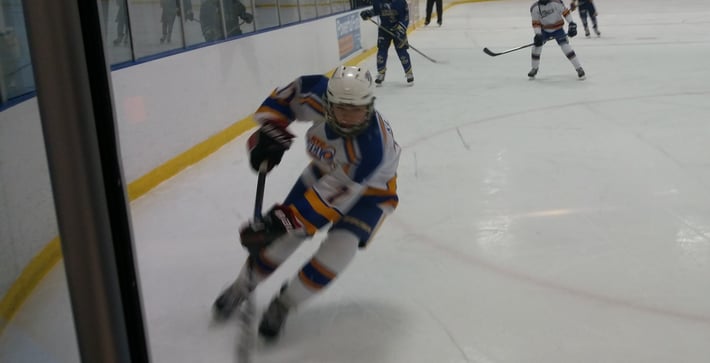 Murphy K. has been a hockey fanatic from a young age. He also happens to be an excellent student. We asked Murphy and his parents some questions we often hear about how to mix very competitive sports with BASIS Independent Brooklyn's advanced curriculum.

Q1: What drew you to hockey?
I got into hockey by chance. The first time I ice skated was when I was five and a friend had his birthday party at an ice rink in Battery Park City. Immediately, I was hooked on skating and wouldn’t get off the ice. I already had started to play some lacrosse which is also a fast and physical game, and hockey seemed like a natural given how much I enjoyed ice skating.

Q2: When did you start playing?
I was six—about a year after I first started skating. 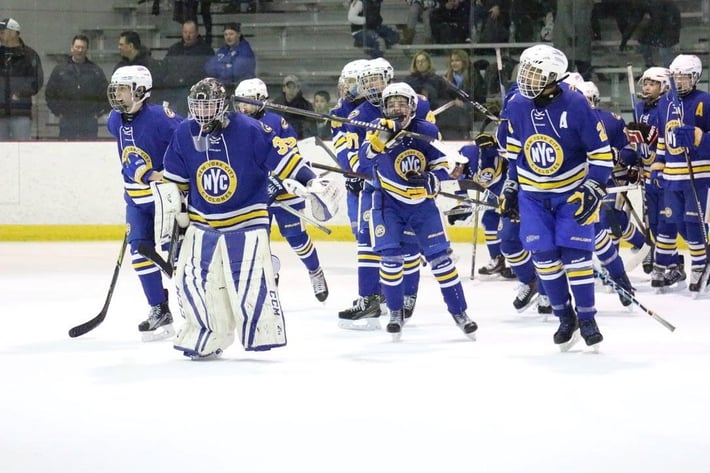 Q3: How often do you practice a week, and how do you fit serious hockey practice in with school work?
During the season, which lasts from the end of August to early March, we have two on-ice practices and one off-ice practice each week. Weekends generally consist of two games, one Saturday and one Sunday. During the off-season, I still try to get on the ice one to two times per week which often means going to Connecticut to find clinics that work with my schedule. During the summer, I’ll do a few weeks of hockey camps (in addition to some academically focused camps).

It’s not easy to fit the commitments of a travel hockey program in with school, especially one as demanding as BASIS Independent Brooklyn. Time management is essential and often I have to give up other things like hanging out with friends or even doing other sports or academic clubs. A lot of my friends know that the most common response they get out of me when they want me to hang out with them is, “Sorry, I can’t, I got hockey.” 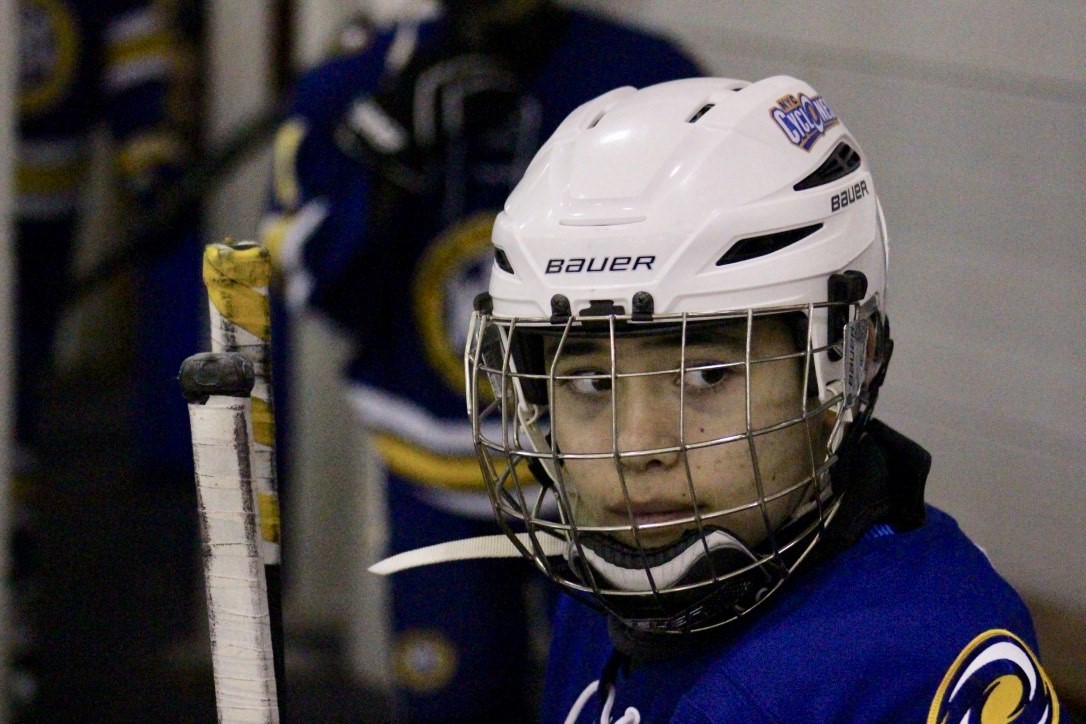 Q4: Any advice for other kids on how to balance really competitive sports and school work?
I’m convinced I do better in school as a result of playing travel ice hockey. The reason is I am always focused on managing my time and making the most of it, which is the key to making this all work. It's easy to get home from school and relax a bit but before you know it, you may have lost a couple of hours staring at some screens.

However, when you have a practice during the week that's going take up close to three hours of your evening (including travel time) or an away game that is going to pretty much eat up an entire day, it really makes you focus on your homework and using all available time to get it done. There’s really no time to think about doing other things. This may sound intense—and it is—but if you love competitive sports, it is worth it. In my case, I really love playing hockey, and I’ve been fortunate enough to have had some great teammates, especially the last two seasons.

Q5: Which professional team is your favorite? Which player?
Favorite Team: NY Rangers

Favorite Player: Gordie Howe, aka “Mr. Hockey." He is considered to be the most complete hockey player to ever play the game and played professional hockey in five separate decades from 1946 to 1980. My favorite thing about him is the “Gordie Howe Hat Trick” is named after him which consists of a goal, an assist, and a fight all in one game! 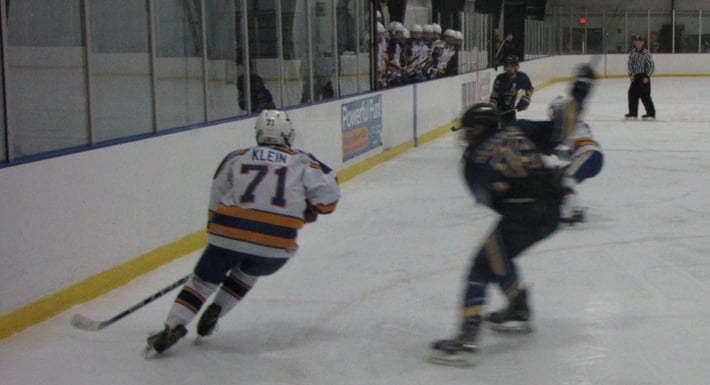 Q6 (To Murphy's Parents): How do you help Murphy prioritize for hockey and school? Any advice for other parents with younger kids focused on both excellence in academics and sports?
At this point, Murphy is able to prioritize his time with minimal guidance from us.  However, when he first started at BASIS Independent Brooklyn, given the homework load, we were extremely hands-on. The first thing we would ask him each day after school was to estimate his homework for each class for the evening and total it up, then add another hour or so to make it realistic.  We’d also run through any assignments that might be due later in the week along with upcoming quizzes and tests. We’d then plan the homework and studying around his hockey commitments for the remaining part of the week. This has taught him great study habits, especially not leaving things to the last minute because that just is not an option when you’re not getting home until 9:00 p.m. and you still need to shower and eat dinner before you can even open your books.

Murphy also knows his hockey commitment is not to be taken lightly. Each year he has to sign a contract with his team that he is to attend all practice and games (among other things), and we all take that seriously. With that said, though, school always comes first. The only time he is allowed to skip hockey commitments is right before pre-comps. Other than that, he knows if he gets behind on his studies, his grades will suffer, and fortunately, Murphy takes his studies very seriously. It also doesn’t hurt that, by attending BASIS Independent Brooklyn, he can brag in the locker room about how his school is having him take 2 AP level courses and he’s only in the 8th grade.

The only advice we have for other parents who have kids interested in both academics and sports is to support your child in focusing on managing their time and understanding their commitments actively until they can handle these responsibilities on their own. Once they can, they will have learned skills that will benefit them for the rest of their lives and will likely do better in school because of their involvement in competitive sports.


Thank you, Murphy, for answering our questions and for sharing photos playing with your Cyclone buddies. We are proud of you and we are so excited to watch your success on and off the ice throughout your high school years here!

If you have any stories of student success outside the school that would interest and inspire our community, please let us know!